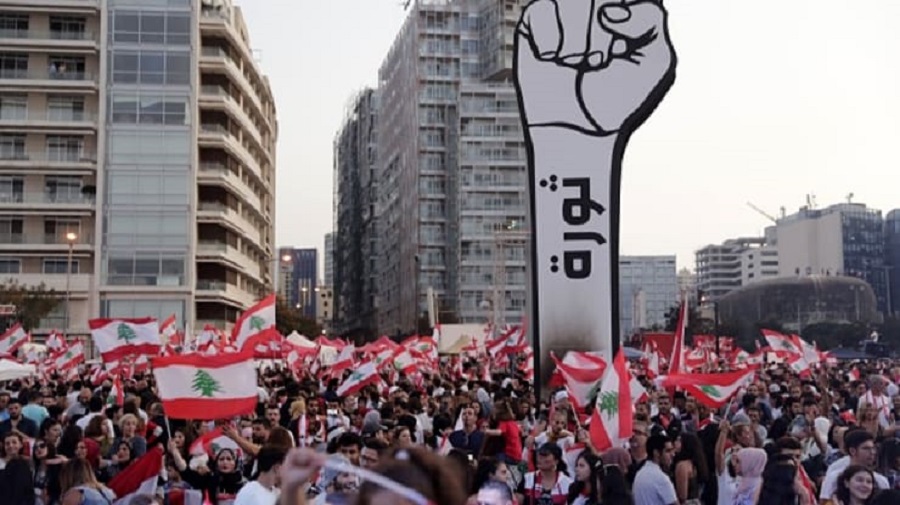 Investors holding Lebanese bonds are expecting the worst, as years of financial mismanagement may well push the country to default on its debt for the first time in its history. Natasha Turak CNBC.com.

International Monetary Fund officials have been called in to help find a solution to manage Lebanon’s overwhelming debt — some 160% of GDP, the highest ratio in the world — amid the worst financial crisis since the Mediterranean country’s brutal 1975-90 civil war and months of popular protests.

Lebanon was hit with a double downgrade over the weekend by two of the world’s largest ratings agencies, dragging its sovereign credit rating further into junk territory. Moody’s and S&P Global Ratings downgraded Lebanon’s long-term foreign currency rating to Ca and CC, respectively — both of which are ten levels below investment grade. The country is now rated lower than Argentina and the Democratic Republic of Congo.

“As a consequence of severe fiscal, external, and political pressures, we believe a distressed exchange or unilateral default on Lebanon’s commercial debt is virtually certain at this point,” an analyst report from S&P Global said last week. The report followed Nabih Berri, Lebanon’s speaker of parliament, saying last week that a debt restructuring would be the “best outcome.”
As the deadline looms for Lebanon’s $1.2 billion Eurobond, maturing March 9, the bond’s price has whipsawed from 90 cents in the dollar in early February to a record low 53 cents last week, with the yield on those eurobonds surpassing 1,000%. The lira, officially pegged to the dollar, has plummeted 40% on the black market as local banks ration dollars necessary for imports of food, medicine and other essential goods.

“They’ll have to restructure; it’s inevitable,” Mohamad Faour, a Lebanese finance research fellow at University College Dublin, told CNBC. “Right now they’re burning through reserves to pay off debt and that’s a classic sign of imminent default. The question is more about the ‘when’ rather than the ‘if’.”

How did Lebanon get here?

“You’re in the middle of a banking crisis, a currency crisis, a debt crisis, and all of that has led to an economic crisis,” Nafez Zouk, a Lebanon expert and emerging markets strategist at Oxford Economics, told CNBC via phone. “It’s not every day that you have a country having to deal with all of those things at once.”

“Financial engineering” by the central bank is also to blame, many economists say, which involved luring dollar deposits from local banks at high interest rates — often upwards of 15% — to finance the government’s spending.
Lebanon “lived beyond its means” for years, Zouk explained, running twin deficits — in both the government’s budget balance and the current account balance — something that required a certain amount of investor confidence to sustain. But in recent years, that confidence has dried up, and so have capital inflows.

Critics of the central bank and its policies call it a Ponzi scheme: taking fresh money from the new depositors to keep paying off the old ones. “It’s like the housing bubble,” Zouk said. “You can keep doing this as long as prices stay up, but as soon as deposits slow down or stop, then you’re screwed. And now we’re screwed.”
A capital ‘wipe out’ for local banks?
Lebanon’s banks also have a staggering proportion of exposure to the country’s sovereign debt: roughly 70% of Lebanese banks’ assets are sovereign and central bank debt instruments. This means that “a default is likely to wipe out the capital of most local banks,” Faour said.

Of Lebanon’s $30 billion worth of international bonds, two-thirds are held by local banks and the central bank, while about one-third is held by foreign investors. Moody’s predicted that a debt restructuring plan for Lebanon would likely include bond writedowns to the tune of 35% to 65% of face value.

“That $30 billion, you need to pay it back. And we’ve gotten to the point where it’s becoming very clear that we cannot repay that money,” Zouk said.

Western and Gulf allies have made clear that any potential aid to the country needs to be contingent on a viable and convincing reform plan, and so far, they aren’t convinced.

Some economists have argued for an immediate repayment of the March 9 eurobond, which will be followed by further eurobond payments due in April and June. But Lebanon is starting to burn through its reserves, which many in the country argue should be kept for funding its import needs rather than paying foreign creditors.

As Lebanon’s current $30 billion in foreign reserves is gradually being depleted — and analysts estimate $1 billion to $2 billion in foreign currency is leaving the country on a monthly basis — Zouk believes a soft default needs to happen now, with a reform plan backed by the IMF, before the situation becomes more dire.

“From a macro perspective that debt should be restructured ASAP before we really have a knife to our throat. Before it’s too late and there are literally no reserves left to do anything,” he added.

Originally published on CNBC by Natasha Turak. Full article can be found here.