The latest Consumer Market Monitor (CMM), published today by the Marketing Institute of Ireland and UCD Michael Smurfit Graduate Business School shows consumer spending continuing to grow strongly and likely to finish at €105 billion for this year, a new record and well above the last peak of €100 billion in 2007. Both retailing and services are doing well, up by 4 percent for the year and spending is matched by strong Vat returns which are up 5.5 percent this year.

The findings of the report revealed a continued surge in demand for household goods, with sales of hardware, furnishings and electrical goods surging by 14 percent, making it the highest growth sector of retailing in 2018. Furthermore, the Home Renovation Incentive scheme, due to expire on 31st December 2018, is incentivising households to invest heavily in the fabric of their homes, with 2018 spend expected to soar to a record €2.1 billion.

Professor Mary Lambkin, author of the report, said:
“In a market where houses for those trading-up or downsizing are in short supply, the Home Renovation Incentive tax incentive scheme has been a major factor driving the trend for home transformation, stimulating a lot of spending on household goods and enhancements, as well as being a considerable support for the building trades and related retail sectors. 12,179 building contractors have been involved in these projects and, given a multiplier of 2-3 for the number of trades contributing to these projects, that may have supported as many as 30,000 jobs.”

Tom Trainor, Chief Executive of the Marketing Institute of Ireland, said:
“Despite the uncertainty around the impact of Brexit on our economy, Irish consumer confidence is significantly higher than our European neighbours and there has been no apparent dampening of consumer spending, as both retail sales and spending on services have remained strong. However, we cannot take this for granted in the period ahead as Brexit plays out.”

Booming Economy
According to the Q3 2018 Monitor, a strong economy has further enabled this trend. An increasing number of people employed, up by 3.4% year-on-year, together with expected pay increases of 3% in 2018, has led to a substantial uplift in the amount of disposable income circulating in the economy, expected to grow 4.4% to €108 billion in 2018. As a consequence, consumer spending rose by 3.6% in the first half of 2018 with full year spending forecast to be up by at least 3%, with further increases in 2019 and 2020.

Consumer spending has also been supported by improving household balance sheets mainly driven by the increasing value of peoples’ homes. Household net worth per capita now stands at €150,768, up 70% from the low of 2012. Perceptions of increasing wealth feed confidence and encourage consumers to release some of their perceived wealth for spending.

Household Equipment
Driven by the strong economy and the booming renovation market, sales of household equipment have been growing rapidly since 2014 and have been the highest growth sector of retail for several years. The volume of retail sales, which represents real growth having adjusted for inflation, has grown rapidly since 2014, and is now more than 50% ahead of the last peak in 2007.

The value of these sales remains 9% below the peak level, however, suggesting that prices are still lower than they were in the last boom. 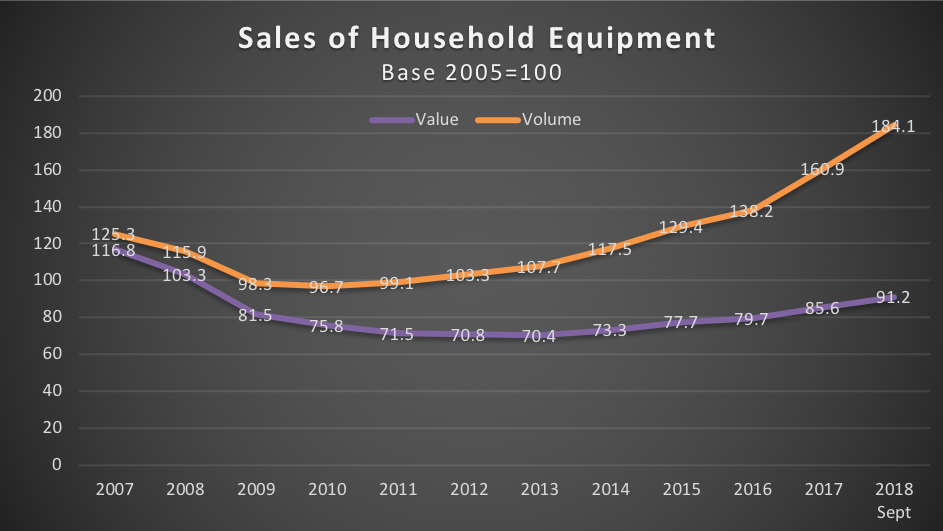 Sales transactions across the residential property market are also increasing year on year and are expected to total 55,000 for this year, up from 50,000 in 2017. The expected increase in sales and supply, in 2019 and beyond, will inevitably add further fuel to this boom in sales.

Composition of Household Equipment
Household equipment is the sum of three categories of household items: furniture and lighting; hardware, paints and glass; and electrical goods. While all three categories are now experiencing strong growth, the level of growth has varied considerably.

The weakest category, relatively speaking, is hardware, paints and glass. This category’s close tie to construction explains why it has been slowest to recover. It is still down by 14% from the last peak in 2007 but is up by 33% from its lowest point in 2012. It has picked up particularly strongly this year, up by 10% in volume terms for the year to the end of September.

Retail Spending
Retail sales (excluding the motor trade) were very strong in 2017, up by 5.8% for the year in volume terms, and by 3.8% in value. This equated to spending of €40 billion which was back to the levels seen in the last boom.  This growth rate was paralleled by a high level of Vat returns which increased by 7.1% in 2017 for a total of €13 billion.

Retail sales have continued to grow in 2018 but at a slower rate, up by 3.9% in volume and 2% in value in the first half of the year. Growth accelerated in the third quarter, up 4.3% in volume and 3.7% in value year-on-year, and this momentum is expected to continue as we face into the final quarter and the holiday season. Vat receipts are moving in tandem, up 5% for the year to the end of September.

All retail categories reported good growth in Q3. Household equipment continued to be the fastest growing category, up 14.4%% in volume and 6.6% in value, year-on-year. Supermarkets and other food stores also performed well as did pharmacies and department stores, although clothing and footwear were a bit weaker, as were sales through bars.