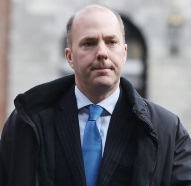 Head of legal affairs at An Garda Síochána,

Head of legal affairs at An Garda Síochána, Ken Ruane completed the Diploma in Corporate Governance at UCD Smurfit School in 2017 and has since completed two further pathway diplomas to earn an MSc in Business (Leadership and Management Practice).

Tell us a bit about your career to date

I qualified as a solicitor in 1998 and worked initially in the justice and crime division of the Chief State Solicitor’s Office, representing clients such as An Garda Síochána and the Irish Prison Service and working closely with the Attorney General’s Office and the Department of Justice. In December 2011, I moved in-house to An Garda Síochána as head of legal affairs.

In this role, I manage two separate divisions in providing key legal advice to the Garda Commissioner and Garda management. The corporate legal advice section deals with corporate governance and legal issues for An Garda Síochána, human resources employment law matters, garda discipline, data protection and freedom of information. We also provide legal advice on a number of transformational projects within the organisation.

The second component of my office is the litigation section, which deals with all legal actions against the Garda Commissioner, from both members of An Garda Síochána and the public. The issues dealt with encompass personal injuries, judicial reviews, inquests and statutory enquiries and we liaise closely again with the Chief State Solicitor’s Office, the Attorney General’s Office and the State Claims Agency.

Why did you decide to do the Diploma in Corporate Governance?

I’m a non-executive director of An Garda Síochána but a member of the  executive team. While I don’t sit on the senior leadership board I do provide advice to the Garda Commissioner and the executive directors on a broad range of issues.

The thinking behind doing the diploma was to get a better understanding of the principles of corporate governance and of the legal and regulatory framework in relation to both executive and non-executive directors, particularly in the context of the changes that are taking place here within An Garda Síochána.

We have several transformational projects going on at the moment, including the new Garda Divisional Policing Model. And, arising from the Commission on the Future of Policing Report, very significant change is taking place within the organisation. Also, I was part of a group here that worked on promoting and embedding a code of ethics for An Garda Síochána.

As a legal advisor I have professional obligations in terms of independence, impartiality and bringing my own experience and specialist knowledge to the organisation. But I wanted a better understanding of my role and responsibility as a non-executive director and how I could develop that and work to enhance and assist the executive board of An Garda Síochána.

I commenced the diploma in August 2016. For me, it was also the first diploma in the MSc pathway.

What was your experience of doing the diploma?

I found it very user friendly – it was two evenings a week, which I was able to balance with my day-to-day work.

I thought the blend of public and private sector personnel doing the course was an extremely beneficial aspect. Apart from the lecturers and the knowledge being imparted within Smurfit, it was a fantastic opportunity for me as a public sector worker to meet with individuals from the private sector and to learn from them. And I think that was reciprocated. There was a real interest in how we operate within public sector regulatory guidelines and also the legal obligations.

One very distinct characteristic of the programme was the element of groupwork. At the very early stages that brought a great collegiality, which is still there in terms of keeping in contact with fellow participants and professional and social networking.

What was your key takeaway from the programme?

In my position I am required to advise the Commissioner on matters pertaining to internal audit, ethics, duties of boards and conflicts of interest, as well as looking at strategy in the context of rolling out various transformational projects within An Garda Síochána. Having completed the course I can now bring a lot of new expertise to various working groups and projects.

Do you sit on any other boards or have plans do so in the future?

I would be very interested in sitting on other boards and have looked into it. I’ve just completed the final module in my third diploma at Smurfit and will shortly graduate with my master’s degree. At that point I’ll be a lot more proactive in seeking out positions.

Having done the Diploma in Corporate Governance, I think I will feel a lot more confident in applying for non-executive positions in the future.